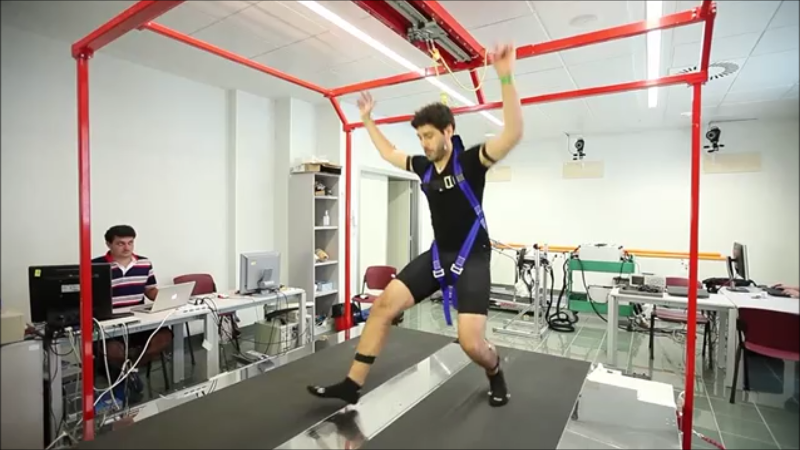 The research interests of the Locomotion Biomechanics Lab's team concern the effects of neuromuscular adaptations resulting by aging and neuro-musculo-skeletal disorders on locomotion-related motor tasks. This ambitious objective relies on the evidence that safe and autonomous walking capabilities allow persons to maintain independence during daily activities, to enjoy social relationships and to retain good emotional vitality. In addition, walking is the most natural form of physical activity, thus providing persons with extensive benefits significantly improving the quality of their life. Accordingly, our studies are aimed at achieving a quantitative assessment of the effects of aging and disorders on locomotion-related motor tasks, and identifying suitable strategies to recovery safe and autonomous walking capabilities.

In this framework, the main activities of our team consists in: investigating the fundamental principles underlying human locomotion; developing robotic platforms to promote the recovery of locomotion capabilities of persons affected by neuro-musculo-skeletal diseases; developing suitable strategies to counteract the lack of balance and prevent the fall risk.

Bipedal walking model provided with compliant – spring&damper - elements
Human walking is investigated by using a simplified paradigm of bipedal machine whose legs are provided with damping and elastic elements.  The model is designed to walk along an inclined plane, in order to make up the energy lost due to the damping element with that gained thanks to the lowering the centre of mass.

Analysis of balance control in humans while managing unexpected perturbations

Angular momentum during unexpected multidirectional perturbations delivered while walking
The biomechanics of the corrective reactions of all body segments in response to unexpected and multidirectional slipping-like perturbations was investigated by analysing the whole body angular momentum. We hypothesized that the coupled contribution of all body segments to the whole body response during intrinsically different and unstable motor tasks – trained walking versus unexpected perturbation – is characterized by similar features. Results revealed that inter-segment coupling was similar even though the reactive response to the perturbations elicited more consistent motor schemes across body segments than during walking, especially in the frontal plane.

Design and development of strategies to counteract the incipient fall

Pre-impact fall detection: optimal sensor positioning based on a machine learning paradigm
Pre impact fall detectors are devices able to reveal an incipient fall early enough to enable suitable strategies aimed at mitigating the effects of the impact with the ground or, possibly, avoiding it. One of the potential weak points of these systems is related to the body sensorspositioning. Specifically, current approaches are usually based on a small set of inertial sensors fixed to the, the thorax, or the thigh with the overall goal to minimize their total number.
A novel algorithm able to identify the best subset of body segments for a rapid and reliable detection of the transition from steady walking to a slipping event was developed. The linear acceleration of all the body segments was parsed by Independent Component Analysis and a Neural Network was used to classify walking from unexpected perturbations. Results support the hypothesis that improved performance can be obtained by simply observing the kinematics of upper and lower distal extremities.

The biomechanics of a group of healthy subjects wearing a novel light-weight hip exoskeleton working in transparent mode while undergoing unperturbed locomotion and managing unexpected slipping-like perturbations was investigated. Preliminary findings support further research on the potential use of powered exoskeletons to assist locomotion and, possibly prevent incipient falls.

Walking can be considered a periodic motor task whose features can be described by suitable mathematical predictors. When the dynamics of the locomotion is altered by a sudden and unexpected perturbation, intra- and inter-limbs coordination is modified and their rhythmic features are lost. This occurrence leads the predictors to seek a new pattern and, consequently, to diverge from the actual kinematic variables.
Based on this assumption, a novel algorithm to detect unexpected slipping-like perturbations was developed. The algorithm compares actual leg joint angles and those predicted by a pool of adaptive oscillators and, if the difference between them is over a preset threshold, the algorithm signals an unexpected postural transition. This strategy allows to early detect a balance loss induced by a slipping-like perturbation: the best performance are represented by a mean detection time ranging between 150 and 250 ms and a low rate (<10%) of false alarms.

During walking elders increase efforts at proximal joints and keep low kinetics at the ankle
Aging affects human walking mainly involving reduction of the preferred speed, increased duration of the double support phase and decreased push-off power at the ankle joint. Specifically, several authors agreed on the hypothesis that aging could involve diminished ankle kinetics leading to shorter steps and lower speed. However, these studies investigated young and elderly people walking at their self-selected speeds, that is, walking speeds were not comparable between the groups. Since the walking speed can be viewed as a control parameter of the dynamics of locomotion, the effects of the aging on kinematics/kinetics at leg joints and timing of the gait cycle was further investigated in a wide range of controlled speeds in order to highlight how aging “per se” modifies gait parameters.

This study aimed at investigating the hypothesis that the aging modifies the activity of neural circuits located in the spinal cord and driving muscular activations.
Results suggested that motor primitives lead the synchronization of muscle activation mainly depending on the biomechanical demand of the locomotion; hence they are not significantly affected by aging. Nevertheless, at the spinal cord level, biomechanical requirements, peripheral afference, and descending inputs are differently integrated between the two groups of subjects, probably reflecting age-related changes of both nervous system and motor control strategies during locomotion.

Age-related neuromuscular adaptations basically consist of a redistribution of workload between proximal and distal extensor muscles, thus the workload of the former actuators increases to compensate for the age-related decline of the latter ones. In addition, aging involves an increased metabolic cost during walking of about 15-25% compared to the young population.
This study demonstrated that age-related modifications of the muscle-tendon actuators do not significantly involve greater mechanical energy consumption during walking. Accordingly, it revealed that the different energetic efficiency between young and elderly people is not due to the increased mechanical energy consumption of the musculoskeletal system.

Comparison between healthy and hemiparetic gait is usually carried out while subjects walk overground at preferred speed. This generates bias due to the lack of uniformity across selected speeds because they reflect the great variability of the functional level of post-stroke patients. This study aimed at examining coordinative adaptations during walking in response to unilateral brain damage, while homologous participants walked at two fixed speeds.
Results showed that, when the walking speed is controlled, the biomechanical adaptations reflecting the pathology are not significantly reflected in the spatio-temporal parameters whereas they are can be better highlighted by intra-limb coordinative patterns. Accordingly, this insight can provide a better understanding of coordinative dysfunctions as a result of pathology and can lead physiotherapists to adopt more suitable treatment interventions.