Former Sant’Anna School Law student appointed as judge to the Constitutional Court of Italy. Rector Sabina Nuti congratulates Emanuela Navarretta: “I am happy that an outstanding woman and a distinguished scholar has been appointed to the Court"

"I am pleased and honoured that Emanuela Navarretta, a former student who graduated and was awarded her PhD in Law from Sant’Anna School, has been appointed as judge to the Constitutional Court by President Sergio Mattarella. The Sant’Anna School for Advanced Studies is playing its role in an increasingly knowledge-based economy and is becoming more and more central to the institutions of our Republic. Higher Education is the key that can unlock talented students’ progress. The appointment of Professor Emanuela Navarretta is demonstrative of her effective work in university and commitment to public service. I think she will have a strong influence on the students who take the Sant’Anna and University of Pisa admission exams.  She is a female role model: she is successful in academic teaching and governance”, said Sant’Anna Rector Sabina Nuti.

Emanuela Navarretta is a Professor of Law at Pisa University. She graduated from Sant’Anna School in 1988 and later received her PhD in 1992. “On behalf of all of our members and the wider Sant’Anna community, I offer my congratulations to Navarretta, as well as our very best wishes for this appointment. I hope she will visit soon her alma mater along with her supervisor and mentor Professor Emeritus Francesco Donato Busnelli who served as our first director and rector from 1984 to 1993”, added Sabina Nuti.

APPICATION DEADLINE FOR THE SEASONAL SCHOOL IN “PHOTONIC TECHNOLOGIES FOR SENSING APPLICATIONS” IS MONDAY, SEPTEMBER 28. FUNDING OPTIONS PLUS "IL TALENTO ALL'OPERA" FOUNDATION SCHOLARSHIPS ARE AVAILABLE FOR STUDENTS FROM PARTNER UNIVERSITIES

The application deadline for fourteen “Seasonal Schools” offered by the Sant’Anna School for Advanced Studies in Pisa is Monday, 21... 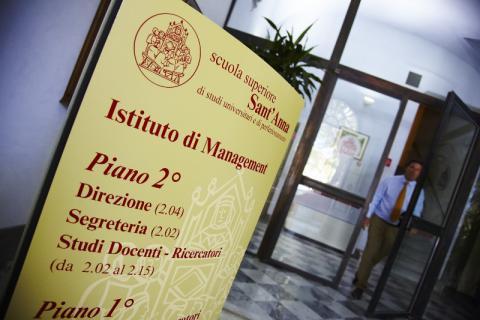 To address the impact of the pandemic in Tuscany, Confindustria Toscana has announced measures and additional support for industrial SMEs....