With a population of 1.3 billion people, Africa combines some of the most dynamic economies on the planet with some of the most unequal societies. The challenges that the PNRR poses in the European context acquire their relevance only from a global perspective in which Africa plays a determining role for the sustainability of the entire planet.
AfricaConnect is the name of the participatory, transdisciplinary and applicative approach that the Scuola Superiore Sant'Anna has been using for over ten years in Africa to contribute to the inclusive and sustainable development of the continent. With AfricaConnect, the Scuola Superiore Sant'Anna pursues its mission based on excellence in education and research with a strong international slant, and proposes itself as an aggregator of transversal and interdisciplinary skills on the African continent with a unique profile on the international scene.

The 5 lines of intervention

The lines of action that characterize the work of AfricaConnect are divided into five fundamental areas:

Activities of Sant'Anna School in Africa

The activities of the Scuola Superiore Sant'Anna in Africa are based on three fundamental pillars: training, research and third mission. A lasting commitment in Africa, but above all with Africa, which today involves 24 countries on the continent in topics ranging from social policy to agricultural science and health management. 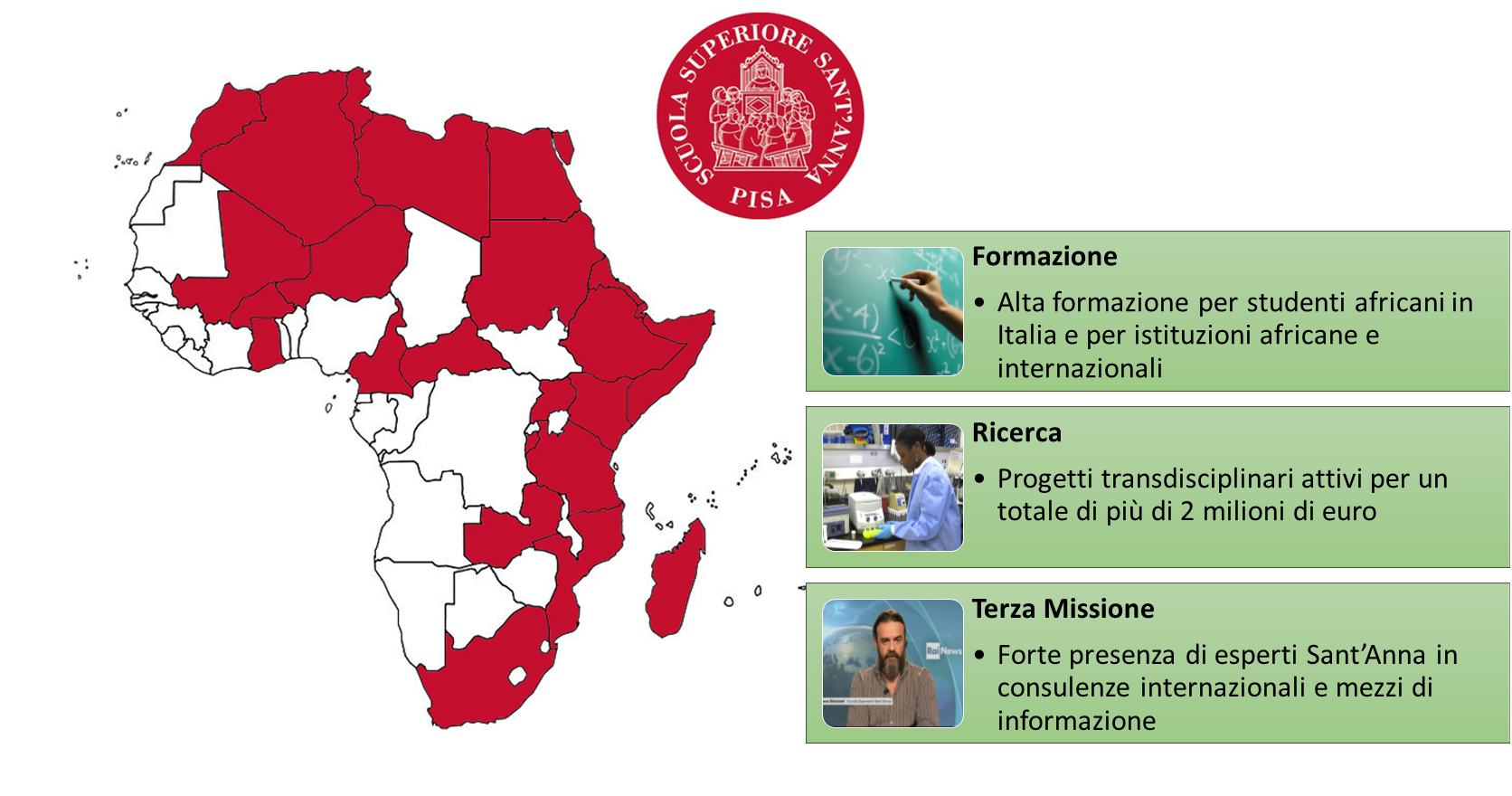 TRAINING
The Scuola Superiore Sant'Anna supports the training of African students in Italy and in their countries of origin. Every year, dozens of African students benefit from scholarships to participate in the ordinary, advanced/doctoral and higher education courses offered by the Scuola. In the last five years, the Scuola has promoted and hosted seven Erasmus+ projects with universities in Ethiopia, Ghana, Sudan and Niger.

RESEARCH
In the Human Rights line of action, the School has a long track record of substantive and applied research on the role of international organizations and civilian personnel in peace operations in Africa, which has resulted in major publications. Today, an action-research project is underway on post-conflict stabilization in South Darfur which foresees the creation of a joint laboratory between the Scuola Sant'Anna and the University of Nyala (Sudan).
In the area of Sustainability, the School has contributed to the varietal improvement of barley in Ethiopia and subsistence agriculture in Mozambique. In addition, projects on legume cultivation in Mediterranean Africa, varietal development in Ethiopia and agricultural sustainability in Niger have made it possible to characterize over 12,000 cereal genotypes, from which new more resilient and productive varieties are developed and distributed.
In the Health area, the School is actively working on the promotion of models of care between hospital and territory in projects involving the analysis and strengthening of capacities for the management of health services in Ethiopia, Uganda and Tanzania.
In the context of Territorial Impact, the School has several projects in Maghreb and Sahel (Libya, Tunisia, Algeria, Morocco, Mali, Burkina Faso and Niger), which aim to understand the resilience of local systems and international responses to transnational security threats (terrorism and radicalization, political instability, trafficking and climate change), with particular attention to the role of women in peace and security processes.

OUTREACH AND IMPACT
Researchers from the School frequently provide interviews and commentary on current African issues to national newspapers and broadcasters (RaiNews24, Rai 1, Radio3 Mondo, Radio24, Rai Scuola), as well as to international media including the BBC, Reuters, Le Monde and Vatican Radio.