From 2008 and 2009 he was Research Assistant at the University of Florence, where he worked on biomedical signals analysis.

From 2009 to 2012 he was a PhD Student at the BioRobotics Institute of the Scuola Superiore Sant’Anna.

From 2013 to 2017 he was a Research Fellow at the BioRobotics Institute, within the laboratory of Prof. Cecilia Laschi.

From January 2018, he is Assistant Professor of Bioengineering. His main responsibilities cover:

He was finalist, with the project Kraken, at the 2012 ASME Student Mechanism and Robot Design Competition, Chicago, USA.

He was awarded, with the project TOW, in the Gear of Innovation Challenge 2014, sponsor: GoEngineer, 3D PrinterWorld and GrabCAD.

He got in 2017, as Principal Investigator, an Early Career Grant from the National Geographic Society, with the project SILVER (Seabed-interaction Legged Vehicle for Exploration and Research)

He got in 2018, as Principal Investigator, a Grant from the Arbi Dario spa, with the project Blue Resolution for the development of an underwater system for the monitoring and cleaning of the Ocean.

My research interests lie in the intersection among mechanical engineering and computer science. Nature is a huge reservoir of smart and reliable solutions, and by using bioinspired approaches I am contributing to the development of reliable machines which exploit their body dynamics to simplify control algorithms. This paradigm is often called Embodied Intelligence. This approach was vastly employed to the locomotion of soft robots, which I contributed to develop with an octopus-inspired robot able to crawl and manipulate objects. Pushing forward this concept, my personal research line is investigating the role of underwater environment to the locomotion of benthic (i.e. that live and move close to the seabed) animals, and to the relationships among deformable body, compliant legs and control. Altogether with the studies on robots locomotion, I am investigating the role of biological vision both for underwater features extraction and for machine controls, exploiting the relationships between the physical environment and biological processing.

Blue Resolution, In this project the advantages of bioinspired approaches to the design of underwater vehicle will be challenged in real demanding scenarios. A six-leg underwater robot will be developed to monitor and clean the ocean seabed from platic and microplastics. Traditional underwater design principles will be integrated with bio-inspired conceptual design and control algorithms, to achieve stable locomotion, precise station keeping and accurate sampling by means of an underwater manipulator. In this project (funded by Arbi Dario Spa) I serve as Principal Investigator coordinating three PhD students and one Research Assistant.

SILVER, Seabed-Interaction Legged Vehicle for Exploration and Research, ambition is to create a new generation of underwater legged robots that will enhance the exploration of the benthonic environment, by providing an underwater robot that safely, precisely, repeatedly, and with a simple user-interface could take high resolution images, move inside underwater structures, collect samples, stand disturbances and monitor continuously a target site. For this project I was awarded of an Early Career Grant by the National Geographic Society, and I am the Principal Investigator within a team made of two PhD students, Giacomo Picardi and Saverio Iacoponi.

SWARMs, Smart and Networking Underwater Robots in Cooperation Meshes. In this European Project, I am contributing with dissemination, management, and research activities. With respect to reserach, I am working on underwater vision of remotely operated vehicles and autonomous underwater vehicles by means of bioinspired vision algorithms based on polarized vision.

Octopus IP. In this European Project, I contributed with dissemination, logistic, and research activities. I studied octopus’ crawling to extract the fundamental principles of this locomotion, and then I used the biological observations to build a novel underwater robot with soft limbs. This work was carried out in tight collaboration with biologists from the BioRobotics Institute and from the University of Jerusalem.

RoboSoft CA. In this coordination action I contributed both with dissemination, management, and mechanical design activities. I was responsible for the implementation of the RoboSoft Grand Challenge, I conceived the rules, deﬁned the scenarios and tasks at conceptual level. I designed and assembled the competition ﬁelds, and coordinated the logistic of the challenge, including the collection and elaboration of the data.

PoseiDRONE. In this National Project, I contributed with dissemination, management, and research activities. I was involved in the implementation of the benthic locomotion of an underwater robot, by taking as inspiration particular gaits such as bipedal walking of octopuses and underwater hopping. The work regarded both the design and control of the legged system.

Flagellum-inspired robot. This project explores the application of soft slender soft propellers (inspired by the motile capabilities of flagella) to develop a novel kind of underwater robots. This project is coordinated by Dr. Federico Renda, from Khalifa University.

MBZIRC, Mohamed Bin Zayed International Robotics Challenge. Tau-theory describes how animals approach ﬁxed or moving targets for tasks such as landing, following a target, stopping to a point, prey catching, and others. I was responsible of implementing tau-theory on UAVs to perform autonomous landing on moving vehicles, and object approaching for manipulation purposes.

Vision-based tracking system. I developed a tridimensional reconstruction algorithm (from images of two cameras in stereo conﬁguration) to estimate the pose and to provide a quantitative comparison among robots and models. My algorithm was used to obtained position and orientation of soft arms, end-eﬀectors and mobile robots.

Biomedical signal processing. The research role regarded the analysis of Videokimographic images and of acoustic signals, for the diagnosis of vocal cord disorders and obstructive sleep apnoea syndrome. I worked in collaboration with clinicians and international experts.

I was appointed as Expert, eligible to do examinations and assess students, on “Natural and Artiﬁcial Senses” subject, Bachelor Degree on BioMedical Engineering, Module: Sensorial Systems. Within the same module, I won a position for Didactic support for an amount of 18 hours (in 2016) while I held four seminars on the same subject during the current academic year (2017).

I supported as Teaching assistant during the past years (2016-2017), on a voluntary basis, the Bionic Engineering course on “Human and Animal Model for BioRobotics”, held by Prof. Laschi.

I supported as Teaching assistant during the past years (2012-2017), on a voluntary basis, the Computer Science course on “Robot Perception”, held by Prof. Laschi.

I was appointed as Teacher for 8 hours of frontal lectures for the post-graduate course Digital Life and Smart Living, TIB: Artiﬁcial Vision (2015-2016).

I was appointed as Teacher for 8 hours of frontal lectures for the post-graduate course Smart Solutions Smart Communities (SSSC), TIB: Artiﬁcial Vision (2014-2015).

I was invited as Young Researcher Guest Lecturer to present a seminar with the title of: “Bioinspired approaches to design and control of mobile soft robots” at the ShanghAI Lectures 2017 Edition

I was invited as Speaker to present a collection of seminars (8hrs) with the title: “Bioinspired approaches to design and control of soft robots”, at the Universtat Politecnica de Valencia, Valencia, Spain, 2017.

I was invited as Speaker within the Simulation of Adaptive Behavior conference, to present “Soft robotics and adaptive locomotion: What an octopus can teach us”, Aberystwyth (UK), 2016.

I was invited as Speaker within RoboSoft Summer School, to present “Soft robotics in underwater legged locomotion: from octopus-inspired solutions to running robots”, Livorno, 2016.

A video of the National Geographic Society has been just released about the first mission with SILVER: https://video.nationalgeographic.com/video/news/180220-calisti-underwate.... It was an amazing opportunity, and it was extremely rewarding to see the robot in action. So proud of all colleagues who worked with me.

It just ended the first-ever National Geographic Explorers Festival, in London, where I presented the results of SILVER project and met several daring explorers. It was an amazing and stimulating experience, where we shared ideas, and passion for science and for our planet. 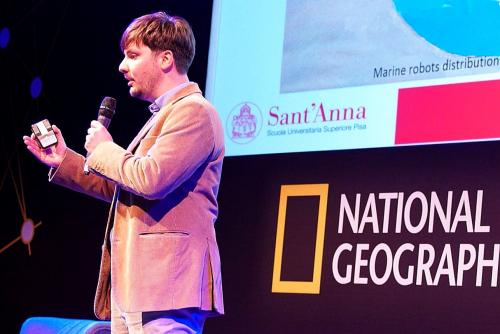