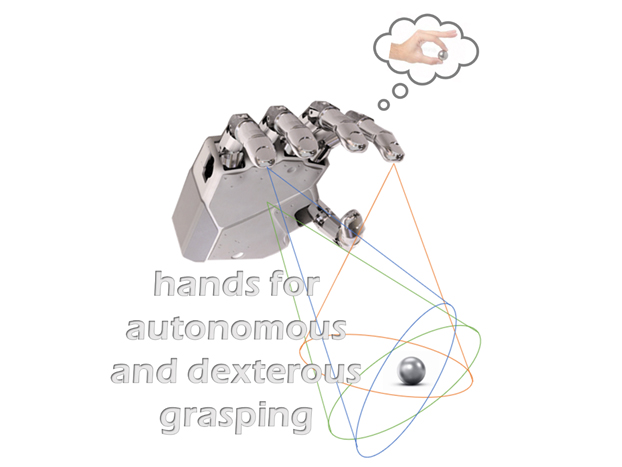 HAND is a research project funded by the Marie Skłodowska-Curie Actions program of the European Union, and it will be carried out within the Artificial Hands Area of the Biorobotics Institute. The human hand is an incredibly complex system with a huge spectrum of functionality. The loss of a hand is a terrific traumatic experience regardless to any gender or ethnicity, usually followed by significant psychological and rehabilitation challenges. The interaction between engineering and science has, for a long time, made efforts to restore the functionality of a lost limb. Although enormous progress has been reached, there are still serious drawbacks in terms of functionality and reliability due to the conventional myoelectric human-machine interface (i.e., electromyography sensors placed on the skin of the residual limb) and to prostheses simply not up to the task. Unfortunately, this is reflected in a too high rejection rate of prosthetic devices. The current situation can change if efforts are spent on the development of more intelligent prosthetic hardware. This project has the mission of developing methods for creating prosthetic hands which are semi (or potentially even completely) autonomous from the conventional myoelectric human-machine interface. This will be achieved by observing in unprecedented detail the human grasping behaviours and exploiting modern sensors technology, efficient data processing units, and artificial intelligence algorithms. Semi-autonomous prosthetic hands can be a game changer, ultimately converting the conventional view of a prosthetic hand from a tool to a more complex device that interacts in an intelligent fashion with the user and any object.

Enzo Mastinu is an electronic engineer specialized in embedded systems for biomedical applications. He received his BSc and MSc in electronic engineering from Universitá degli Studi di Cagliari, and his PhD in biomedical signals and systems from Chalmers University of Technology, Göteborg, Sweden. The work carried out during his research years in Sweden allowed the development and at-home clinical application of a unique technology: an arm prosthesis connected simultaneously to the patient’s muscles, nerves and bones, intuitively controlled and provided with tactile sensory feedback via direct neural stimulation. Preliminary results from the clinical trial have been recently published on the New England Journal of Medicine.
Enzo contributed to the publication of 11 articles on scientific journals and 15 on international conferences (Scopus: citations>200, h-index=10). He is a reviewer for scientific journals and conferences (Publons: >50 reviews) and editor for 2 special issues. To date, he contributed to the supervision of 15 MSc students, 9 interns / research assistants and 2 doctoral students, and contributed to the teaching of 2 MSc courses.